For Joanna and Bruce's incredible wedding
THIS FEATURE 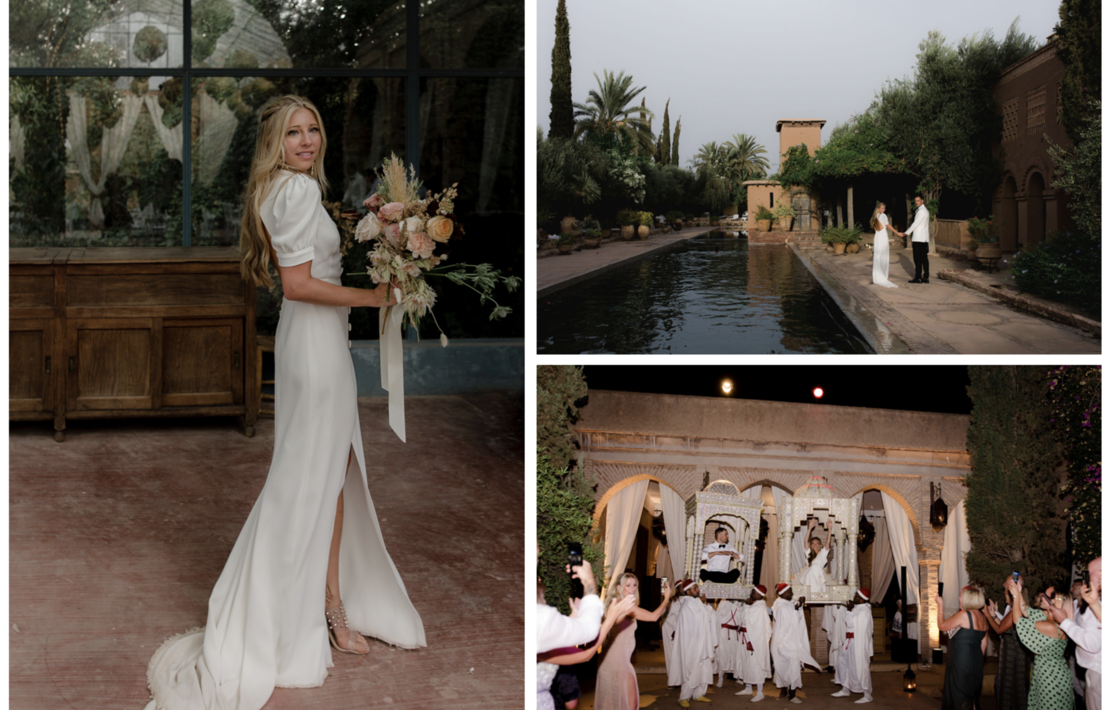 Judging by the photos, Joanna and Bruce's wedding looked pretty incredible! From the WOW venue in Marrakesh resplendent with palm trees, fire eaters and delicious tagines to the beautiful Silk Bon Bride gown, we wanted to find out all the deets!

Every romance starts with a 'Meet Cute' so its natural we start this story (ok feature!) with Joanna and Bruce's beginning.

Tell us how you met!

It was love at first sight! We met through mutual friends, I was 19, Bruce was 21, both at University. I’m so proud that our relationship has lasted this long….through the highs and the lows!

How and when did you get engaged?

﻿We were engaged for 2 years before we got married. Bruce proposed when I was pregnant with our son Anderson on a country walk on boxing day. It was simple and low key which suited us perfectly. Having Anderson with us on our big day was beyond special. 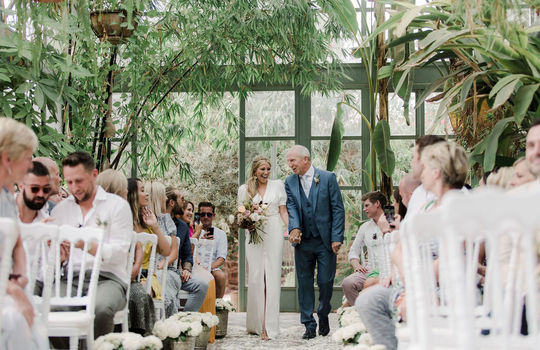 What was your vision for the wedding?

We had visited Beldi Country Club a few years before getting engaged and immediately knew we were going to get married there. We love Marrakech and it feels like a second home to us- it’s exotic, chaotic but so charming. We really loved the idea of bringing all our family and friends to our special place! And of course the guaranteed sunshine was a huge draw!! Although caveat- it did actually rain during the celebrations which just proves the weather really is out of your control wherever you are. 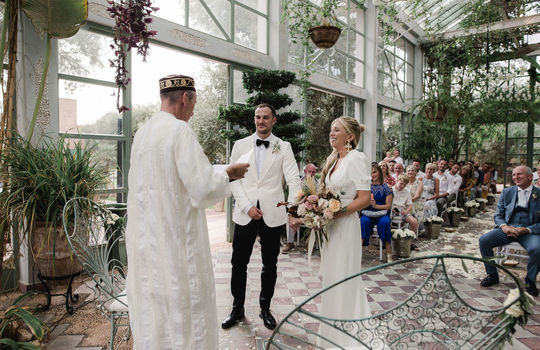 How did you personalize your wedding to reflect who you are as a couple?

﻿We wanted something simple and different. We didn’t have flowers on the tables but instead huge palm leaves to compliment the botanical surroundings. We didn’t have some of the more traditional items like favours/wedding cake and instead focused our budget on the food and entertainment, which personally is more memorable! 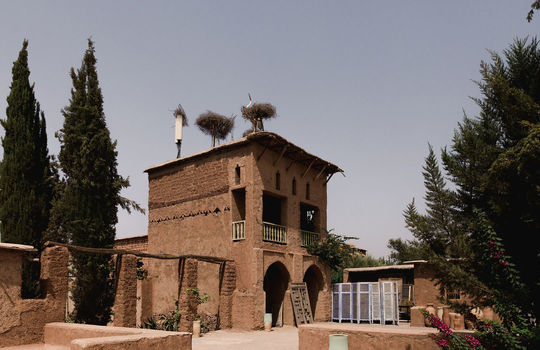 What was the planning process like? Did you have a wedding planner or on the day help?

It was super chilled and calm until about a month before when panic set in! Getting married in Morocco was not easy- the culture there is very different to the UK in terms of organization and customer service!!! But Beldi really pulled it out of the bag on the day. 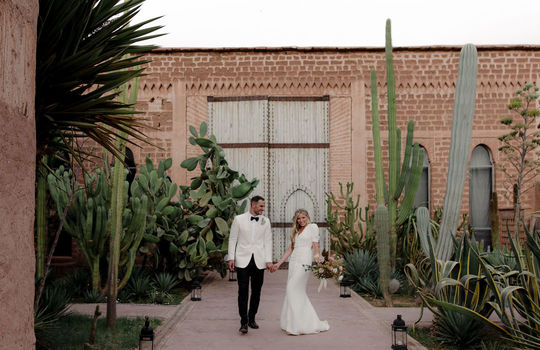 Were there any traditions / specifics you did, or the wedding party organized?

Hardly any of our friends/family had been to Marrakech before so we really wanted to incorporate some of their traditions into our big day. We chose to have a fire show during the cocktail hour, bellydancers after dinner and instead of a first dance we did it Moroccon style and entered on Palenquins! I was worried it could have been a bit too ‘themed’ but was so glad we chose the extra entertainment elements as it created such a party vibe that was so different to a traditional UK wedding. 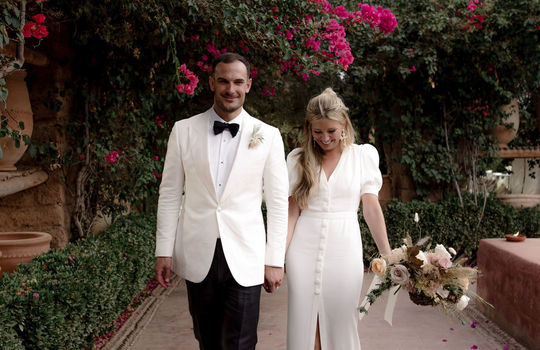 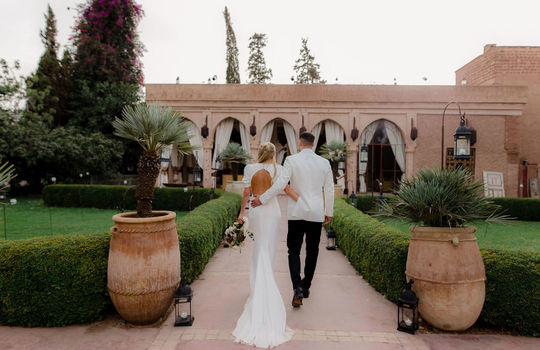 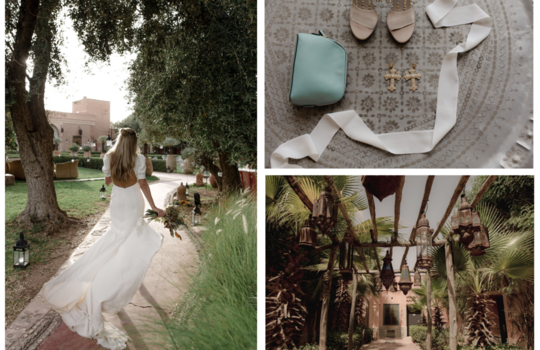 Tell us about the Dress!

How lucky am I that one of my best friends started her own INSANE bridal label in time for my wedding!!!!!!! Pippa has created the most incredible collection with BON BRIDE so it was an absolute no brainer to ask her to create my dream dress and an honor to be a BON BRIDE. I am so proud of her for following her dreams and disrupting the bridal industry in a big way.

Wow….who knew choosing wedding shoes would be so hard!!! I knew that I wanted something a bit different and in the end settled on these studded mules from Carvela. I had already chosen my studded cross earrings by an LA designer called Victoria Chapman and so wanted an element of gold on the shoes to compliment. 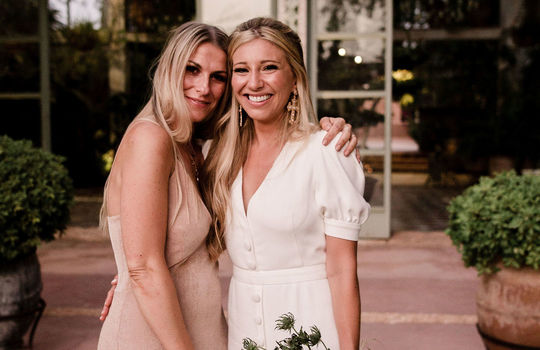 How did you know it was THE dress

Pippa (in photo above!) and I worked on the design 9 months before the big day. We started by sharing inspo photos on Pinterest. I actually saw an Allessandra Rich dress that had buttons down the front and a belt. Pippa had been working on something really similar for her collection so it felt like it was meant to be. Initially I had wanted long sleeves but due to the Marrakech heat we changed them to puff short sleeves which I was so happy with and Pippa suggested the open back, one of her signature design features, which showed some sking!! Everyone commented that the dress was very ‘me’ which I think is a huge compliment. I felt amazing on the day, the dress was completely bespoke to me! 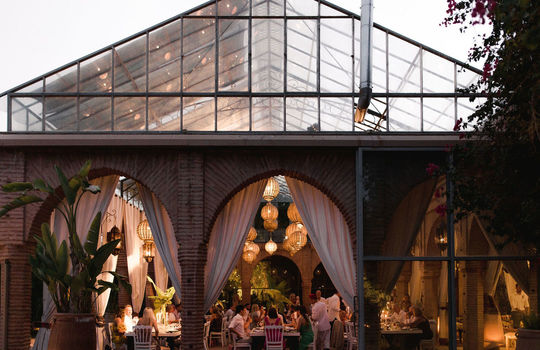 What were the décor details at the Ceremony?  Was anything particularly important / traditional / symbolic?

﻿Luckily the Beldi just nailed every detail. The ceremony was in the most beautiful greenhouse surrounded by vines and palms, there were woven baskets filled with white rose petals. The dinner was in the riad filled with candles and huge palm leaves in vases. A couple of elements we made at home and took with us including our menus which we made by hand  and we had some Vinyl printed for the order of the day + cocktail menu which we transferred onto huge vintage mirrors that are just lying around the Beldi grounds.

What entertainment did you have?

We found a great guitarist called Adam who played before/during and after the ceremony. He went above and beyond and played during the dinner too which I loved! Then as mentioned we had some traditional Morrocan entertainment- fire eaters, bellydancers and the palanquins and then a friend of a friend Djed for us. He was incredible and kept everyone dancing all night!!

We chose a Morrocan song whilst we entered on the palenquins which the DJ spun into ‘I’m every woman’ by Whitney Houston!

What was your menu like? Any specialities? How did you choose the menu?

We did an amazing menu tasting at Beldi! It was a feast fit for a king and we chose Shrimp salad for starter, a chicken Tagine for main and tarte tatin for dessert. The tagine’s were served in traditional pots with couscous which made it all the more theatrical! 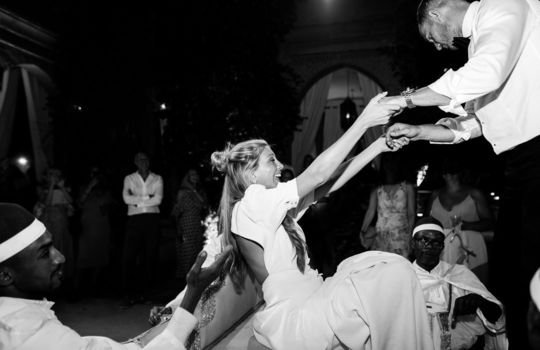 What are your three most memorable memories of the day?

Walking down the aisle and seeing my 2 handsome boys at the alter (pinch me!)

Hearing our guitarist playing ‘Shallow’ as everyone entered the riad for dinner, the sun had set, candles had been lit and it was breathtaking and so emotional. I had goosebumps.

Being carried onto the dancefloor on the Palenquins with my new husband was just surreal and hilarious all at once.

We use necessary cookies to make our site work and to enable you to use our site more easily. We also use analytic cookies to help us to improve our website by collecting and reporting information on how you use it. For more information about our use of Cookies, please see our Cookies Policy. Click ‘I ACCEPT’ to consent to the use of these cookies. You can change your consent choice each time you return to this site.

I accept
I do not accept